Traveling as a dual citizen

Traveling as a dual citizen and using two passports is one of the major benefits of having Thai dual citizenship.

While a Thai passport alone ranks in the middle of the field in terms travel freedom it provides (57 out of 96 according to the passport index website) when combined with having a western passport (which are generally ranked in the top 10), it is literally a ‘best of both worlds’ situation.

While western passports general provides visa free access to most western countries, the Thai passport is highly useful for traveling around the ASEAN bloc. Countries such as Myanmar, Indonesia, Laos, Vietnam and Cambodia normally require paid visas from western passport holders, but generally allow automatic 30-day entry for Thai nationals. Add to that some outliers – Russia for instance allows Thai’s to enter visa free, while charging Americans, Australians and British up to $140 per single entry visa – having a Thai-western dual citizenship combination is very handy from a travel perspective.

There are couple of guiding principals to using when traveling as a dual citizen which can minimize hassles.

Always enter and exit a country on the same passport. This is particularly true around Asia, where immigration officials are particularly stamp happy and have strict immigration controls on arrivals and departure. If you enter Singapore on a certain passport, you need to depart on it, so immigration records are complete.

Always use a Thai passport to enter Thailand

Avoid using your non-Thai passport to enter the country, otherwise upon entry into Thailand you will be subject to immigration rules and limits on your stay. Thailand WILL treat you as a foreigner for immigration purposes if you enter on non-Thai passport, and you will need to apply for extensions of stay, 90 day reporting and overstay fines if your stay exceeds your granted time.

How to travel with two passports

A good example on traveling as a dual citizen is outlined below. This is for a hypothetical trip between Bangkok and Sydney. 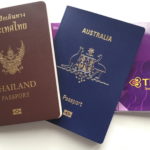 
Pass through either the manual desks or e-gates, showing your boarding pass and Thai passport. 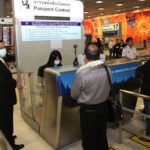 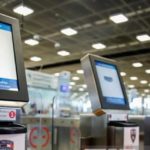 On arrival at destination

Upon arriving in Australia, you wont need your Thai passport for this portion of the journey. Simply pass through immigration using the Australian passport. 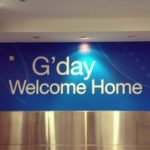 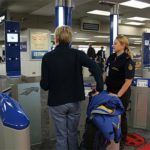 On the return journey, repeat the above process, exiting Australia using the Australian passport and re-entering on the Thai passport. Obviously, the process is similar for people traveling to the EU, UK, North America and other destinations where using a western passport is more advantageous that a Thai one.

Q: I was born outside of Thailand, what happens when I come to Thailand the first time?

A: Many Thai citizens are born outside of Thailand these days, so it is extremely common for people to be entering the first time on an unused Thai passport issued from an embassy overseas. You have two options generally: use the auto gates, where you can simply be scanned in automatically without an immigration officer, or if traveling with Thai citizen children, enter the Thai passports lane to be stamped in by an immigration officer.

Q: But don’t Thai immigration they look for exit stamps from the country I have just traveled from?

A: At major airports, when flying in, Thai immigration officials don’t look for stamps from where you have just traveled from. This is for a variety of reasons. Firstly, many countries, Australia, Singapore, HK, the UK and the US either don’t stamp passports when departing, or they don’t have formal immigration checks when you leave. So Thai immigration officers aren’t going to be looking out for stamps.

Q: I’ve heard horror stories however of people traveling to Thailand for the first time on a fresh Thai passport, and an immigration officer refuses to let them in on their Thai passport and make them use their foreign one.

A: Unfortunately, this has been known to happen, as some junior immigration officers simply don’t know their own rules. Traveling as a dual citizen isn’t illegal! Fortunately, this is a rare occurrence these days with the advent of the auto-gates for Thai passport holders which allow you to enter and exit without the need of even interacting with an immigration officer.

Nevertheless, if you do come across an immigration officer who is being difficult, ask to speak to a superior. They will certainly know the rules much better and normally this problem has always been solved by asking for assistance from a superior.

It is also worth understanding the Thai constitution on this matter, which clearly states:

Q: I entered Thailand on my non-Thai passport. What can I do to stay longer term?

It depends on your circumstances and intent. If you are here less for 30 days, then there is no issue. You’ll simply leave Thailand at the end of your stay, but obviously have to use the foreign passport line when you depart.

If you are planning to stay longer and want to avoid overstaying, you unfortunately can not ‘switch’ your entry stamp between your foreign and Thai passports at a local immigration office. Many have tried with no success. Given this you have two options:

Again however, if you decide to remain in Thailand using this method, you’ll be subject to immigration rules for things like 90-day reporting, further extensions and overstay, and be necessitated to travel in person to immigration and pay the applicable fees. We’ve outlined this article: Thailand ancestry visas.

Q: If I do a passport swap – which is the best way, by air or land?

A: Swapping passports mid-air is the recommended. As explained earlier, immigration officials at airports don’t keep tabs on ‘stamp trails’ in passports.

It is a different story with crossing Thailand’s land borders unfortunately – where traveling as a dual citizen becomes very difficult. Officials at the border (whether it be Myanmar, Laos, Cambodia or Malaysia) will want to see stamps showing you left Thailand. And they will want to see it in the same passport. Malaysia, as an added bonus, doesn’t even recognize the concept of dual nationality, so they may even refuse you entry if you tried to swap passports at a land border.

Coming back into Thailand, officials at land borders are pretty strict at insisting on stamping you into Thailand on whatever passport you left the last country on. People have tried, and succeeded, but generally they get pretty sticky on the issue. If you rate your debating skills, by all means do so. But a safer bet is just to fly in and out of the country to do a passport swap. It is the path of least resistance and doing so on a Low-Cost Carrier such as Air Asia means it need not be an expensive exercise either.

Q: I’m traveling out of Thailand to a western country. I will use my western passport to enter that country. Will the fact I have no visa in my Thai passport be an issue for Thai immigration at the airport?

A: No, it won’t be an issue for immigration. It is the airline who need to see that you have the right to enter the destination country visa free. Without proof of this, they won’t issue a boarding pass.

For single passport holders, a visa for the destination country (or the right to enter visa free) is proof that you are entitled to travel.

When checking in, simply show BOTH passports to the airline check-in desk. They will know from your western passport that you can enter the destination country without a visa. They will then issue you with a boarding pass.

Proceed to immigration and use your Thai passport and your recently issued boarding pass to pass through immigration.

Q: My kids have Thai dual citizenship and are born in Thailand. Which passports should they use for travel?

Q: I am still worried about using both passports when I travel. Is it okay if I only use my Thai one for travel?

A: Traveling only on your Thai passport is perfectly acceptable in most cases. The onus on you will be however to get the correct visa before you travel – if they are required for Thai passport holders. Often this is a costly exercise and requires a visit to the embassy of the destination country.